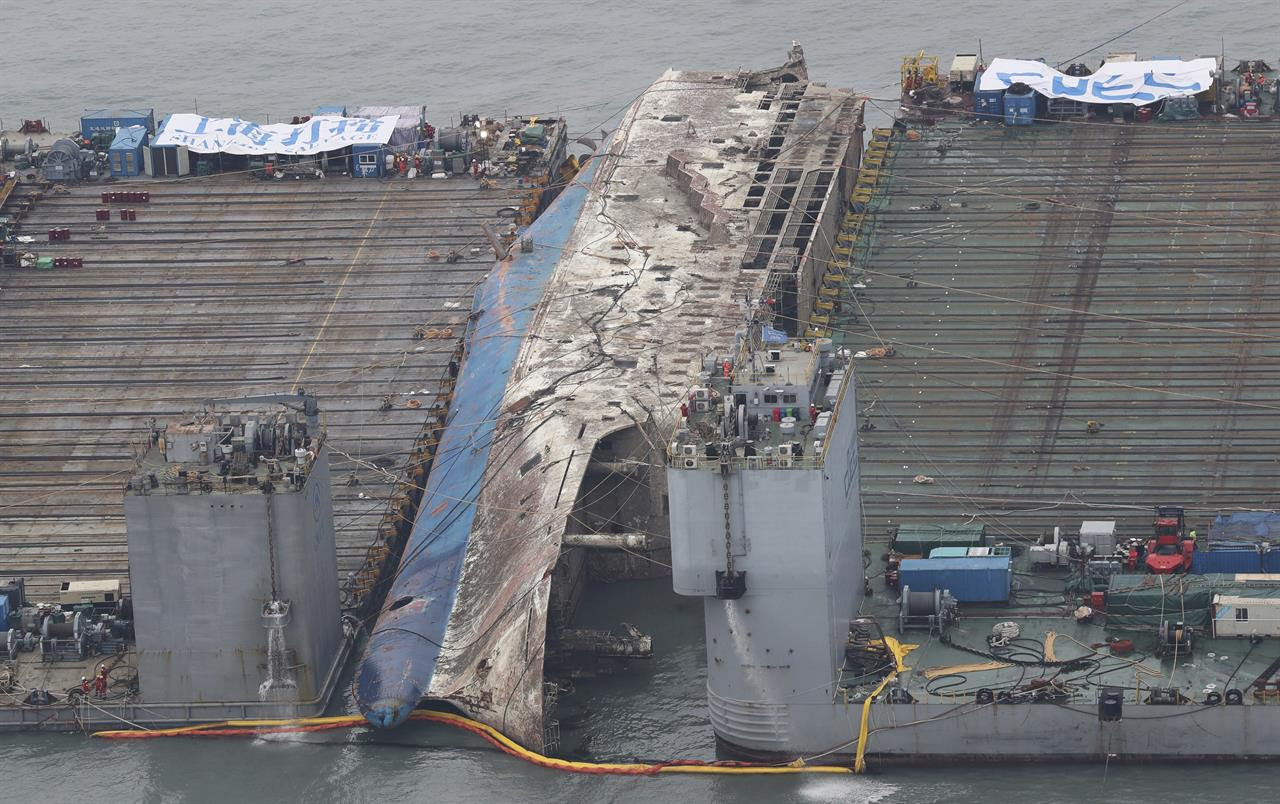 In this Friday, March 24, 2017 photo, the partially lifted sunken ferry Sewol, center, is ready for transport in waters off Jindo, South Korea. South Korean efforts to bring a sunken, 6,800-ton ferry back to land cleared an obstacle on Friday after divers cut off a vehicle ramp that had been dangling from the ship and hindering efforts to raise it. 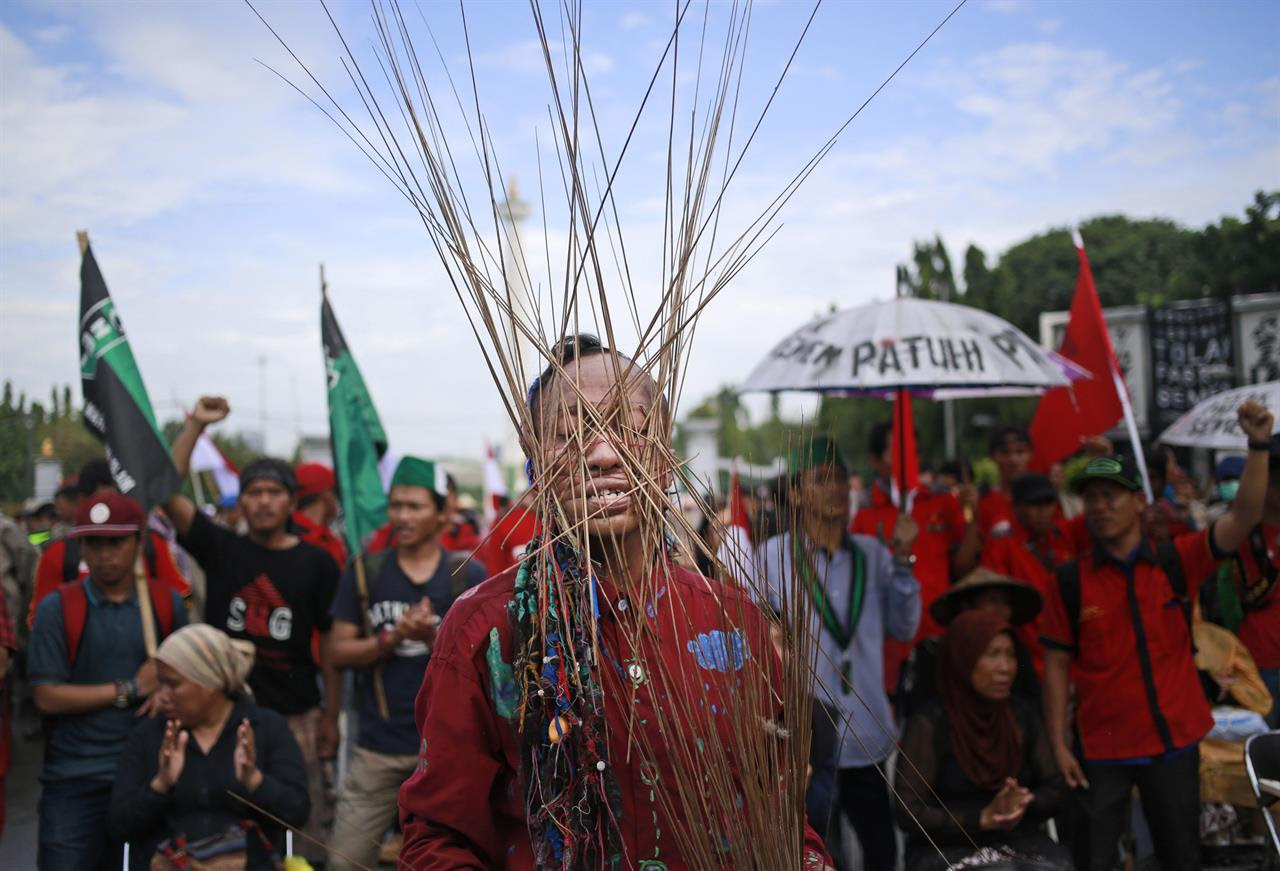 In this Monday, March 20, 2017 photo, an activist has skewers wrapped around his head with rubber bands during a rally against the operation of a cement factory in Kendeng, West Java, outside the presidential palace in Jakarta, Indonesia. Kendeng farmers have battled against plans for the factory for years, saying it could taint their water. The factory is now more or less complete and the owner, state-owned PT Semen Indonesia, has said it would create jobs and boost the local economy. 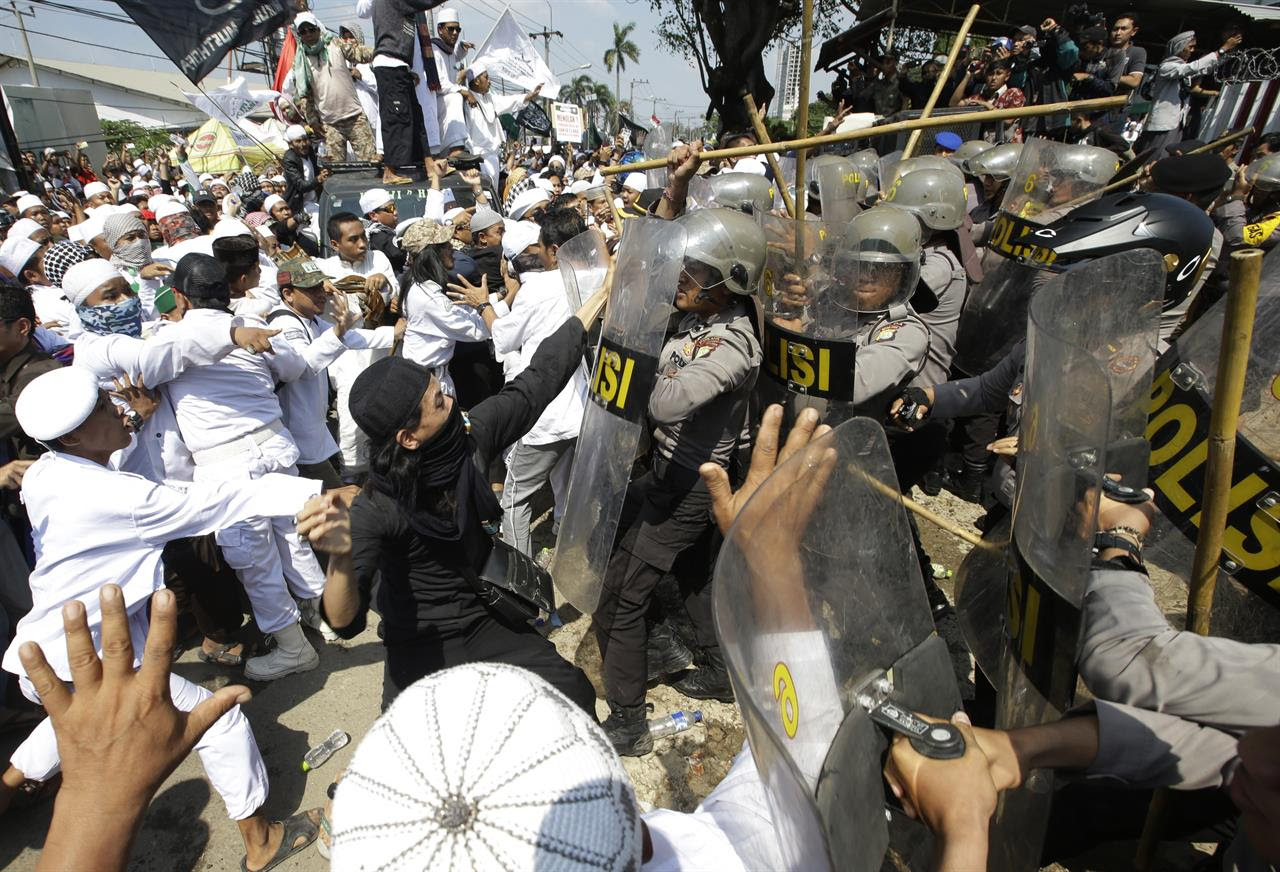 In this Friday, March 24, 2017 photo, police officers clash with Muslim hardliners during a protest against the construction of a Catholic church in Bekasi, Indonesia. Indonesian police fired tear gas to disperse the protesters as they tried to force their way into the Santa Clara church, which has been under construction since November. 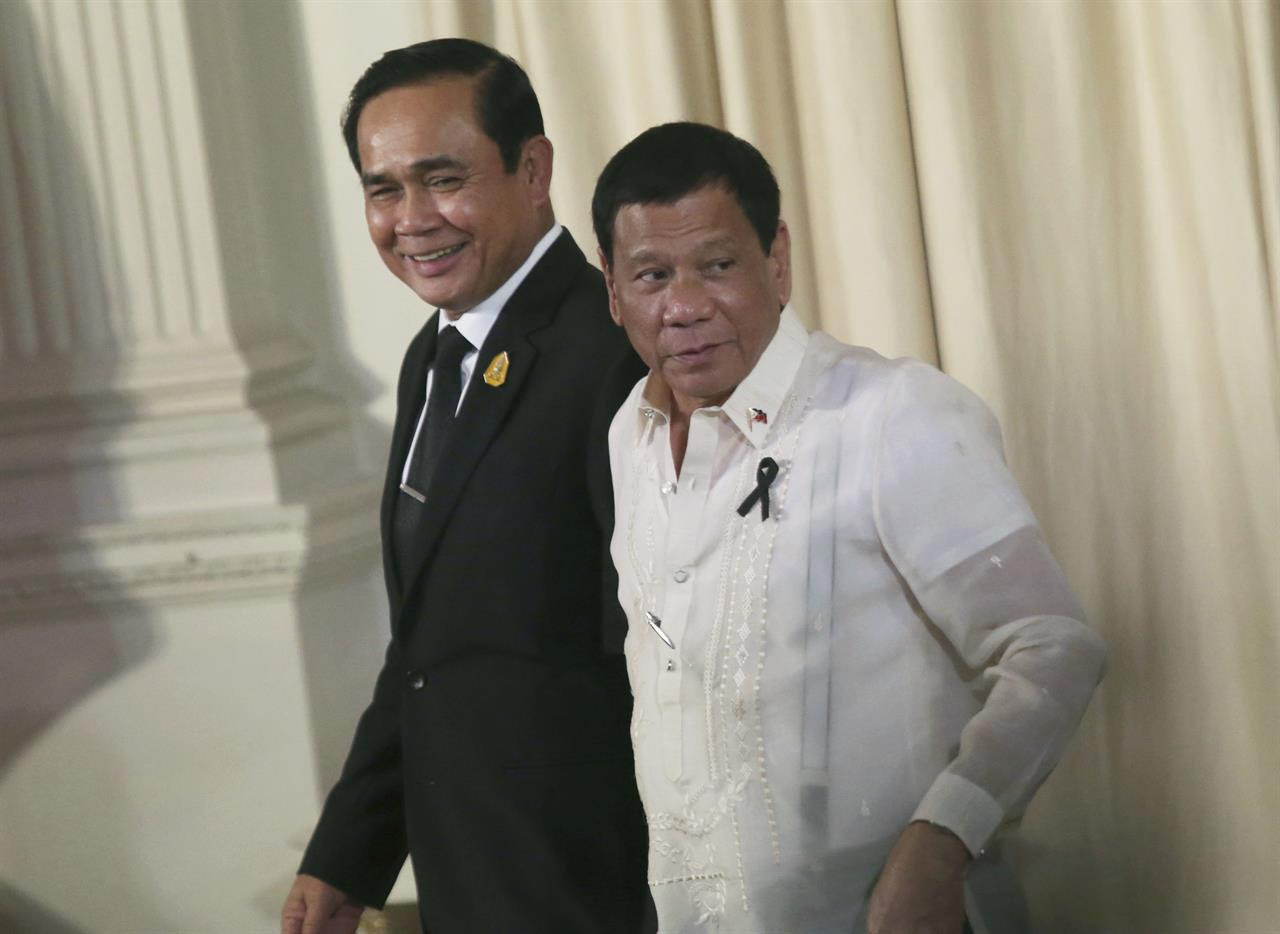 In this Tuesday, March 21, 2017 photo, Philippine President Rodrigo Duterte, right, and Thailand's Prime Minister Prayuth Chan-ocha walk together as they leave a joint press conference at the government house in Bangkok, Thailand. Duterte is in Thailand for a two-day visit rounding out his nine-country tour of southeast Asia. In this Thursday, March 23, 2017 photo, Hong Kong chief executive candidate, former Chief Secretary Carrie Lam, speaks to the media during an election campaign in Hong Kong. Hong Kong is poised to choose a new leader on Sunday, March 26 when members of a committee dominated by pro-Beijing elites cast their ballots, in the first such vote since 2014’s huge pro-democracy protests against the system. 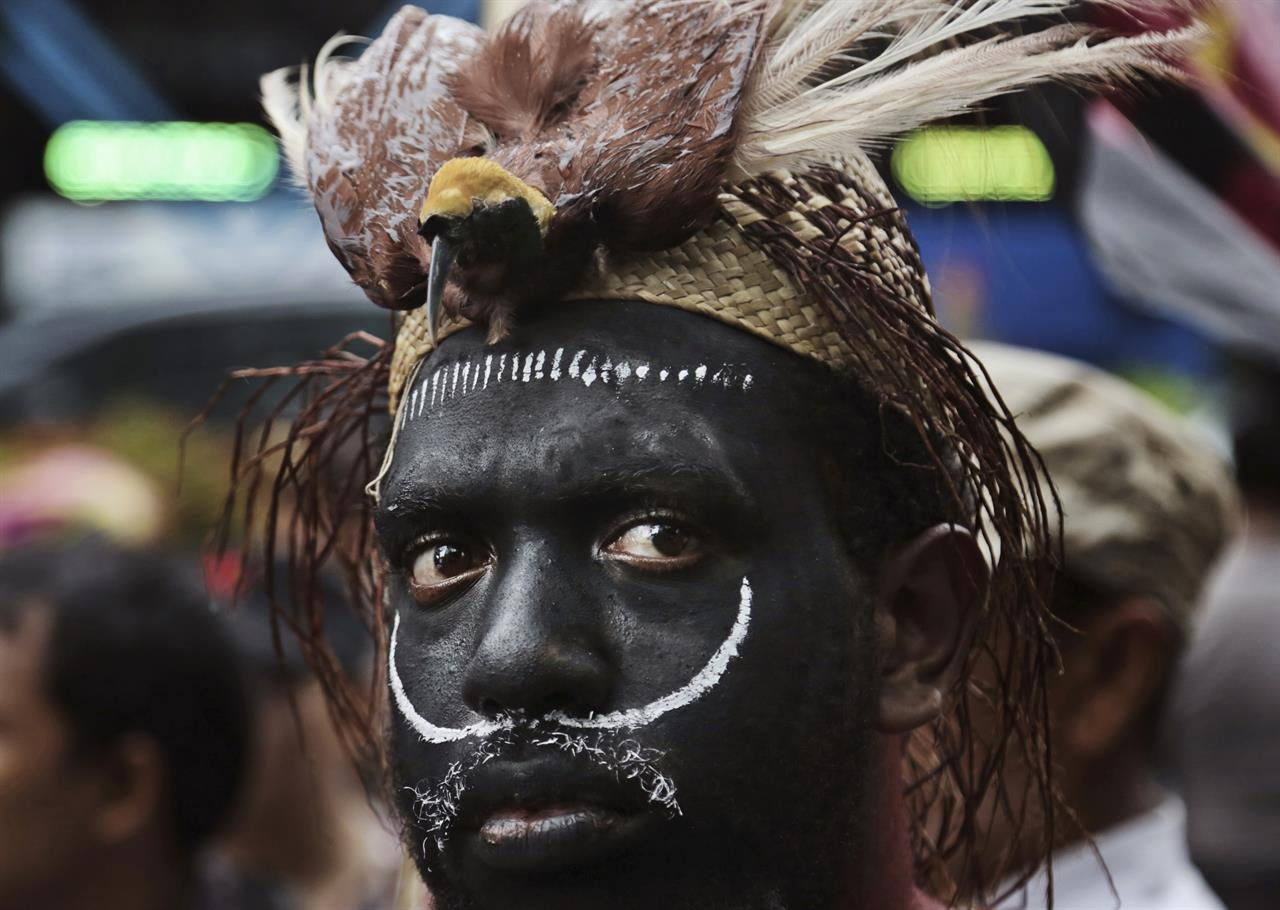 In this Monday, March 20, 2017 photo, a Papuan activist donning a traditional headwear with a stuffed bird of paradise attends a protest against U.S. mining giant Freeport-McMoRan Copper & Gold Inc. in Jakarta, Indonesia. A group of activists staged the protest demanding the New Orleans-based mining company close its mine in Papua province saying that it siphons off the region's wealth and gives it little in return. 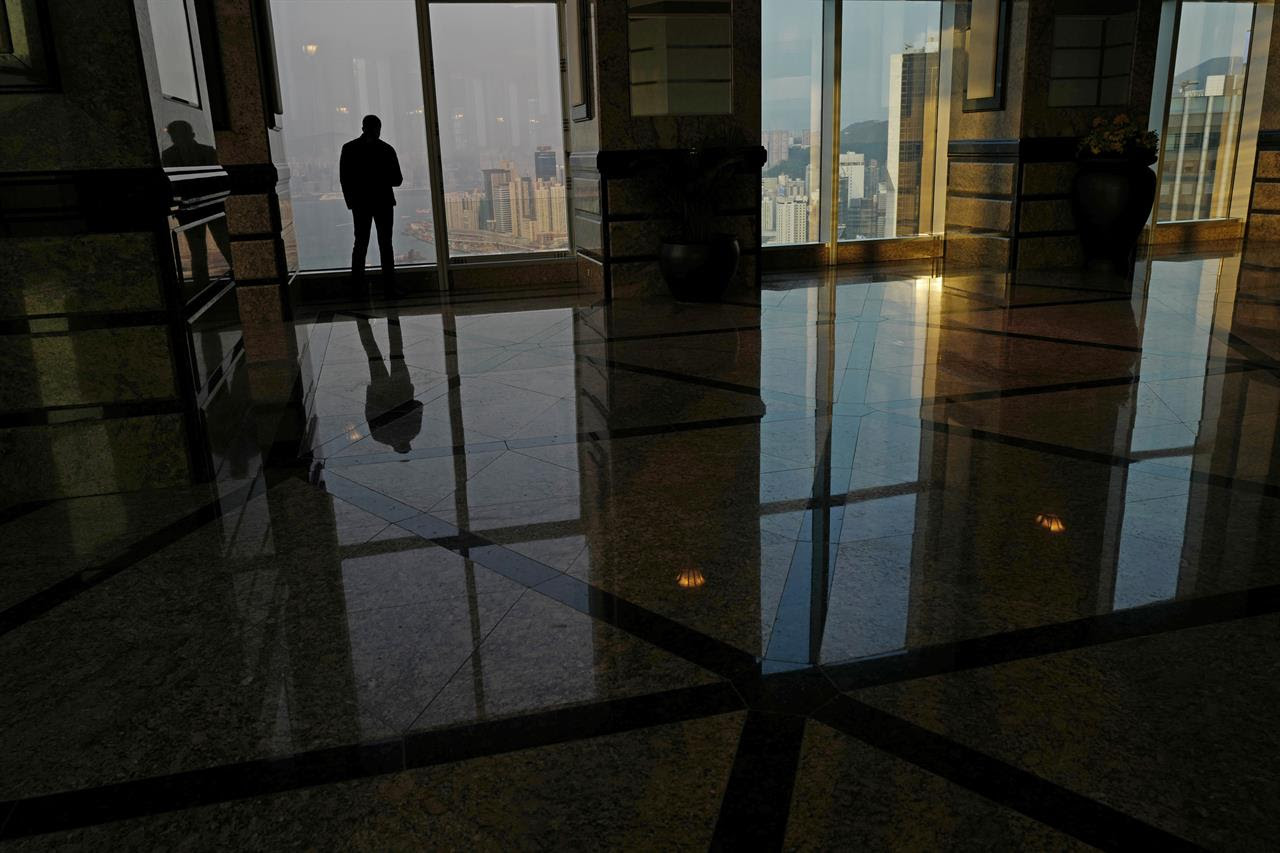 In this Monday, March 20, 2017 photo, a man looks at the Victoria Harbour from a commercial building in Hong Kong. In the morning of Sunday, March 26, a select group of tycoons, business leaders, politicians and trade and industry group representatives will gather in a cavernous exhibition center to vote for the next leader of Hong Kong. Three candidates are on the ballot but there's little uncertainty about who the winner will be, with China's communist leaders already signaling early on their preference to the committee, which is stacked with pro-Beijing loyalists. 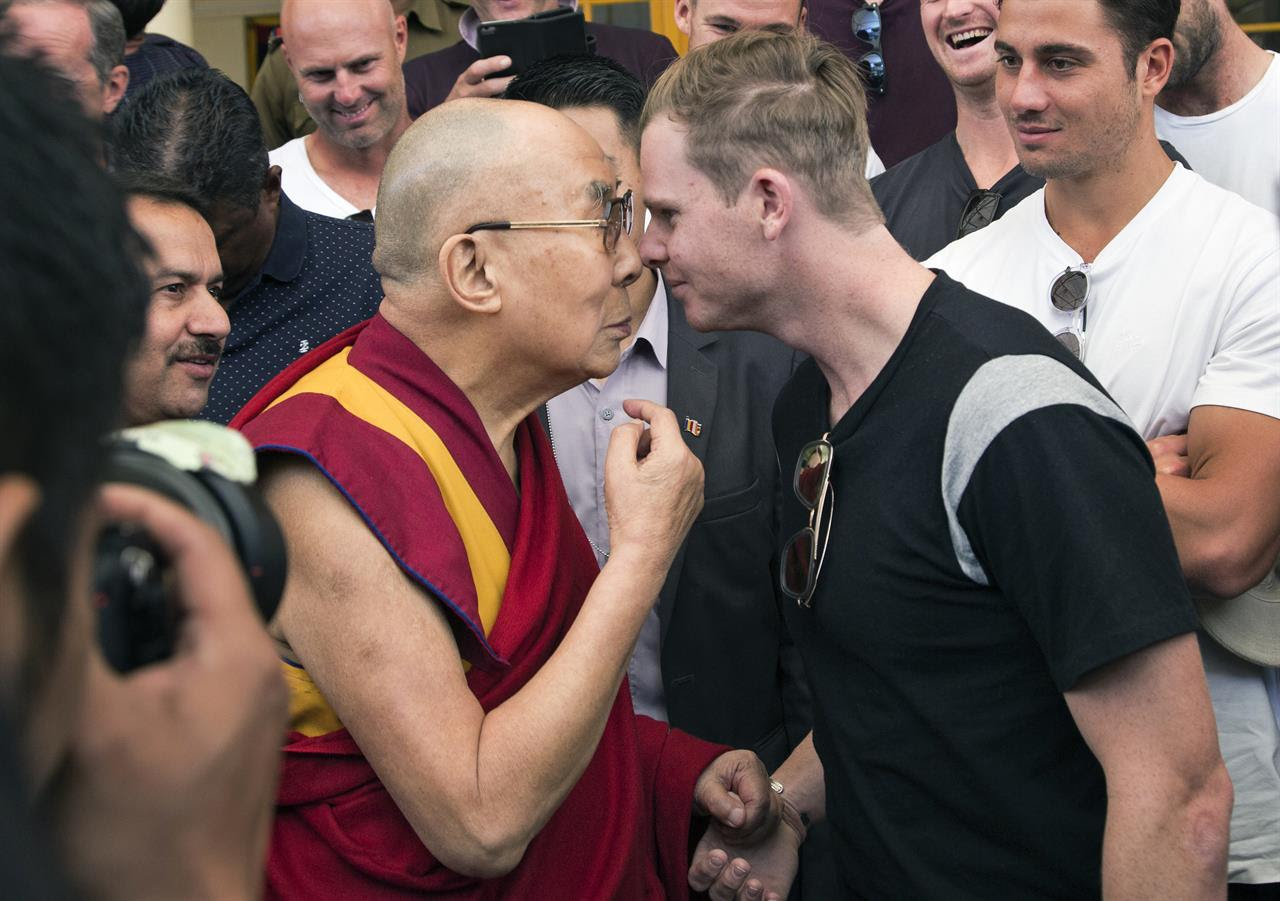 In this Friday, March 24, 2017 photo, Tibetan spiritual leader the Dalai Lama and Australian cricket team captain Steven Smith rub their noses during an interaction with the team at the Tsuglakhang temple in Dharmsala, India. 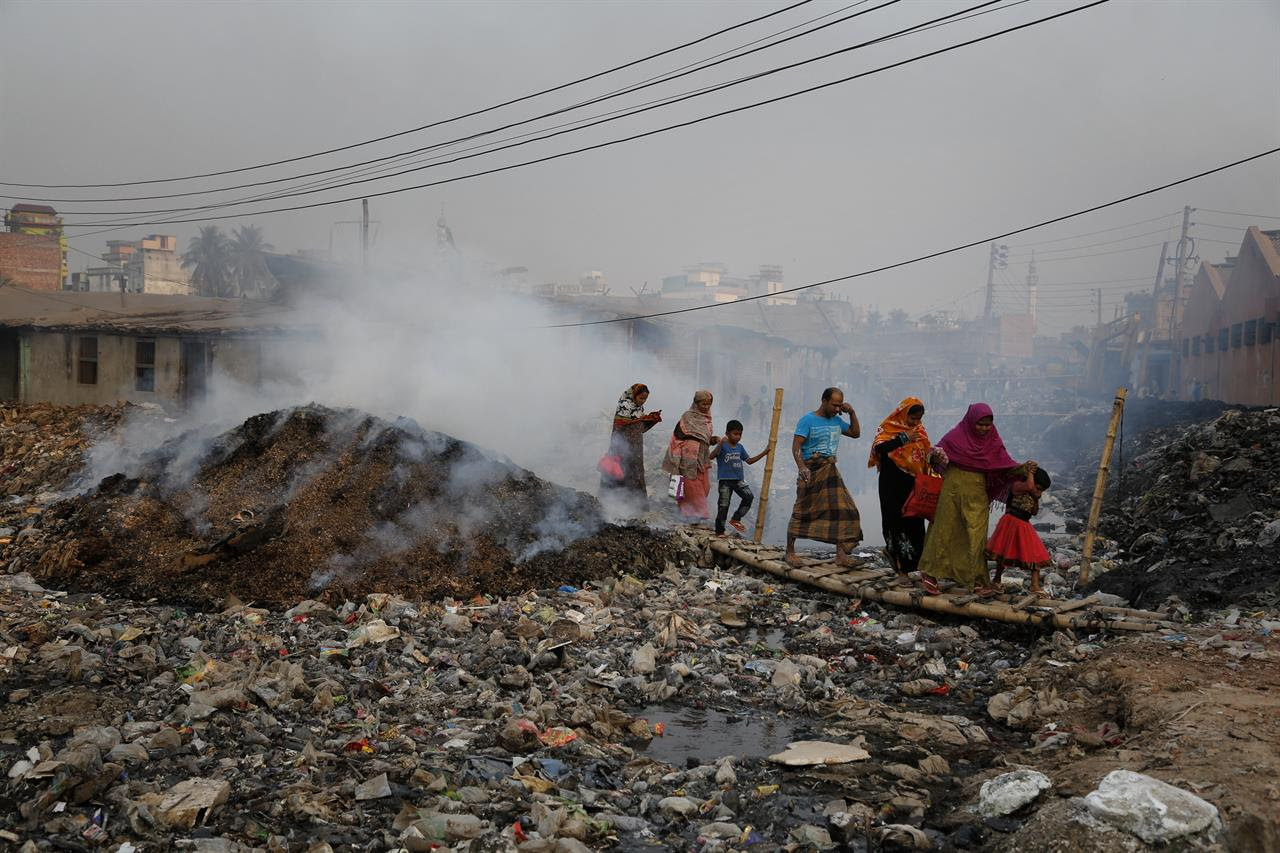 In this Monday, Feb. 6, 2017 photo, Bangladeshi people walk across a temporary bridge as smoke emits from tannery waste at the highly polluted Hazaribagh tannery area in Dhaka, Bangladesh. Pure Earth a nongovernmental organization that addresses industrial pollution put Hazaribagh on its Top 10 list of polluted places, along with Chernobyl, although similar problems of pollution and dangerous working conditions exist at tannery clusters in the Philippines and India as well. 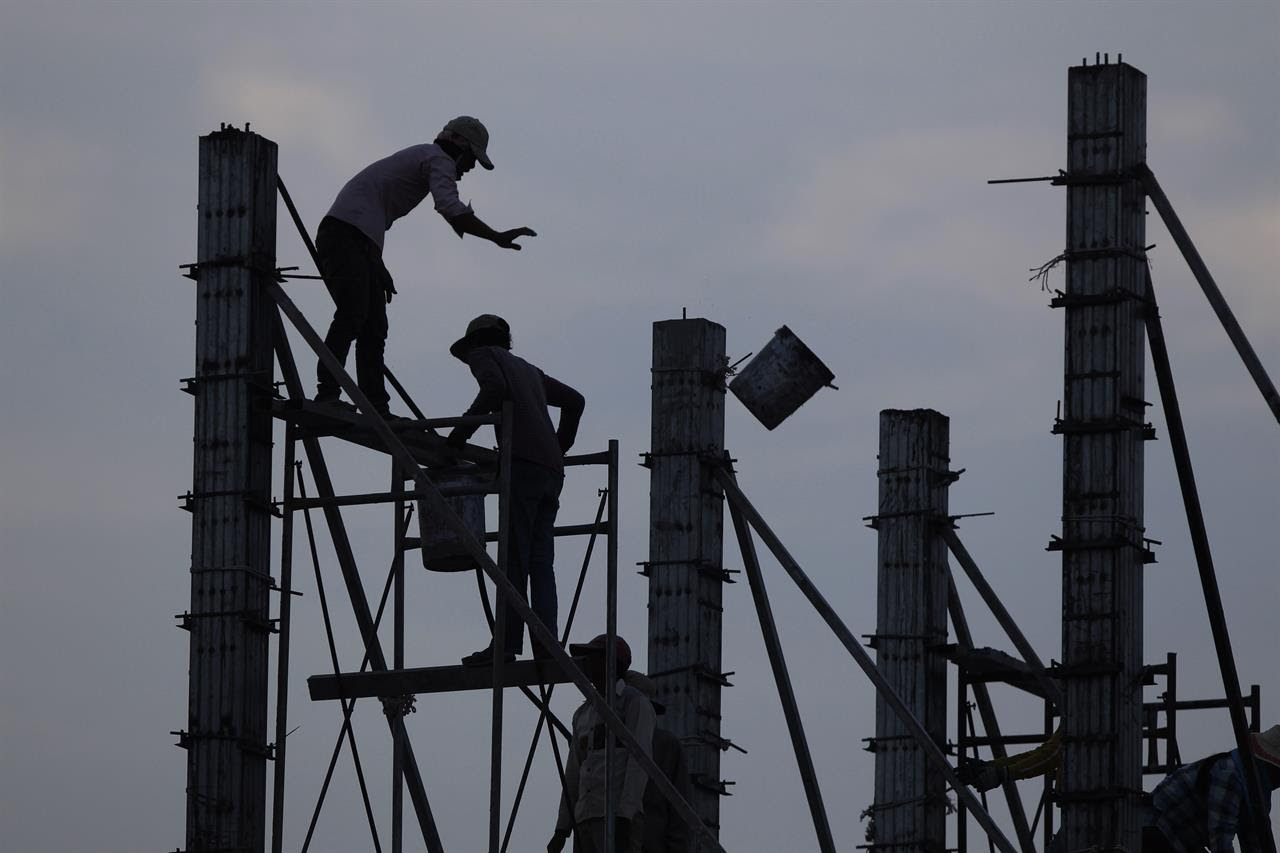 In this Tuesday, March 21, 2017 photo, workers on scaffolding are silhouetted at a building construction site near Phnom Penh, Cambodia. 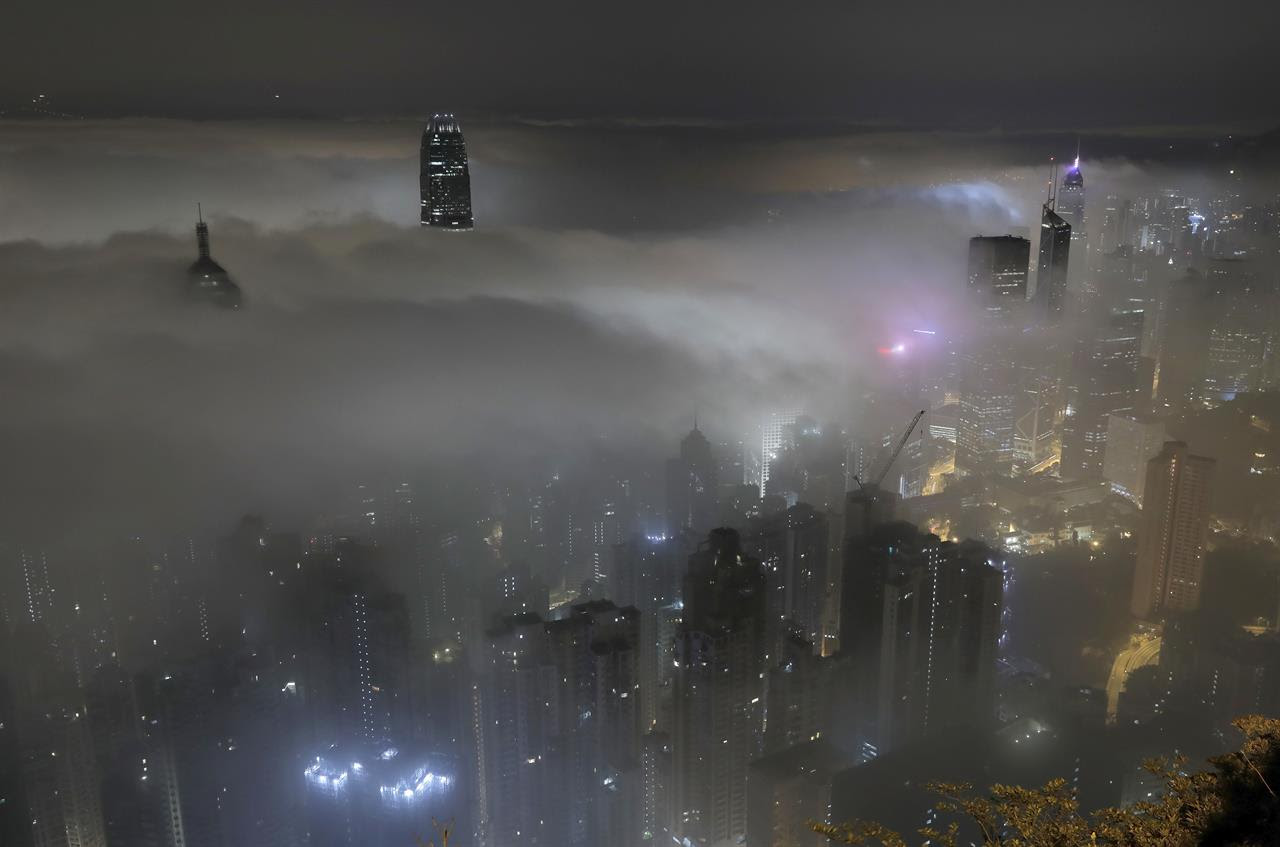 In this Monday, March 20, 2017 photo, high-rise buildings are partly covered by heavy fog at Hong Kong's Victoria Harbour. Fog blanketing Hong Kong is common in springtime and may greatly affect shipping and aviation. 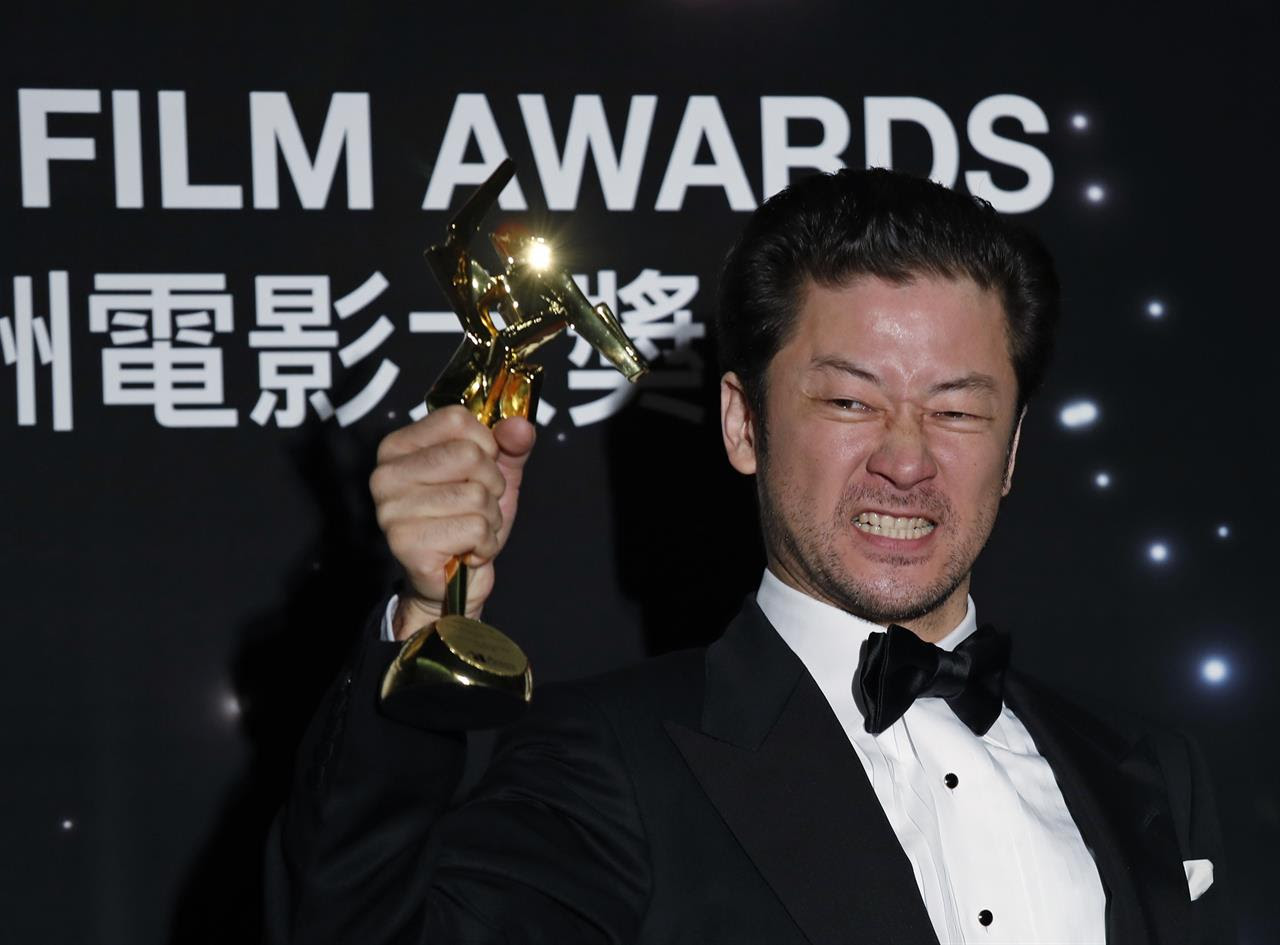 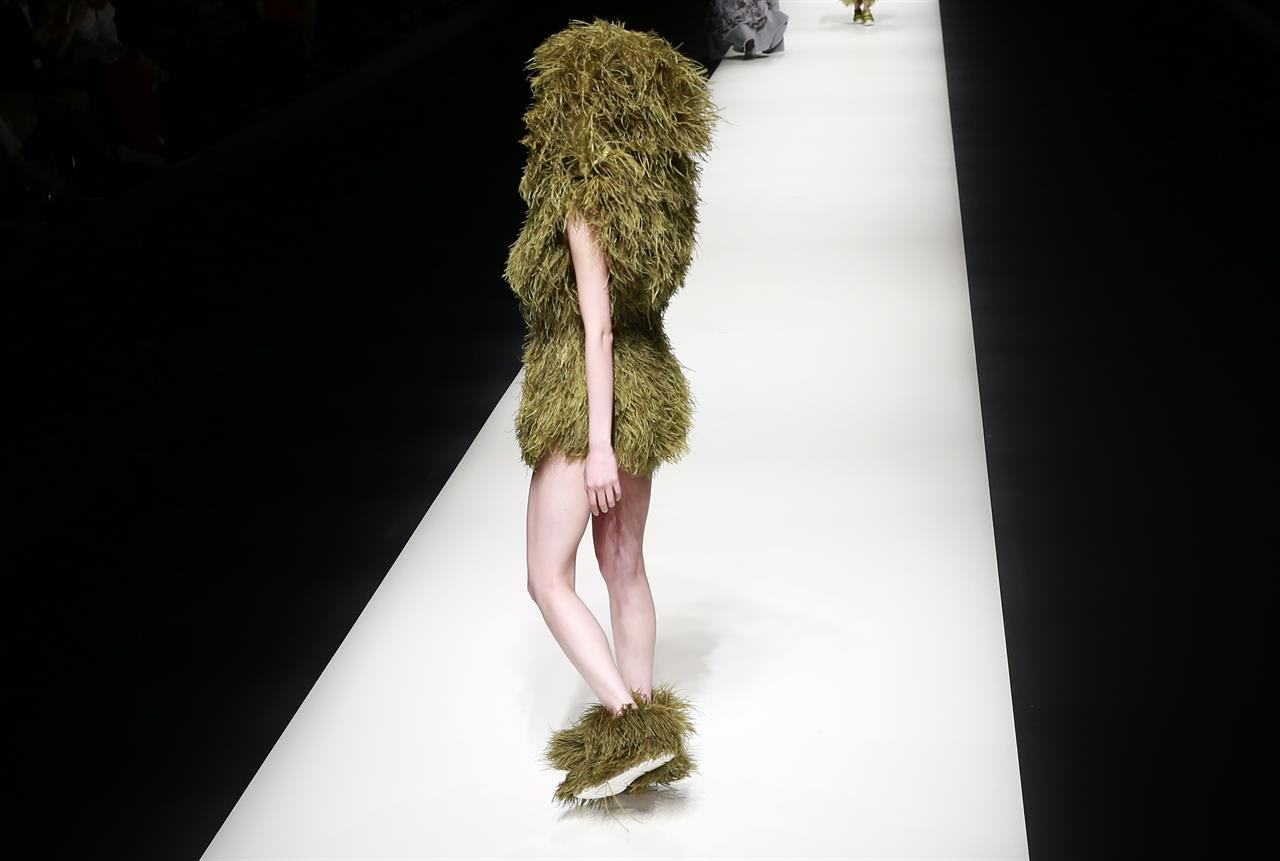 In this Tuesday, March 21, 2017 photo, a model displays a creation by Vietnam's Nguyen Cong Tri during the 2017 Autumn/Winter Collection at the Tokyo Fashion Week in Tokyo.